Cord cutting is ditching cable or satellite for internet based TV. In previous years it only refered to those that only had a cell phone and no land line connection. This is a short version of how we switched and something that became a big issue for our family.

Today cord cutters have more options than ever. We started with a Roku Stick while we still had our AT&T Uverse. Our U-Verse bill had climbed to almost $300 for 18Mbps internet and their U-300 package. That seemed really high when in reality we watched maybe 10 channels. 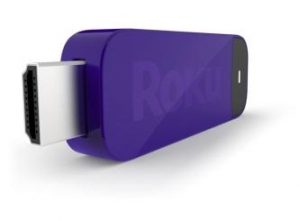 We ended up with a Roku Stick, pictured above. The Roku Stick worked great out of the box and setup took only a few minutes. Within 30 minutes we were overloaded with entertainment choices. There was so much content! We tried it out for a few days and were sold. We signed up for Netflix, HULU, and added the Amazon Video app (it has a prime section if your an Amazon Prime member).

There were only two other requirements, Walking Dead and Kentucky football. Sling TV solves this problem for $25 a month we were able to get both AMC, ESPN, and the SEC Network. I should add this summer we added the CBS app for $5.99, because well sports. Not only that but there’s a PBS app which I love. It has almost everything you can find on the broadcast version including the kids shows and of course my favorite the Woodwright Shop. We’ll review our experience with streaming apps later.

We canceled our U-Verse and instantly saved over $150 a month. We’re a family of four with two children ages 4 and 6. They never noticed. Our kids quickly became masters of the Roku. It was then that we decided to upgrade to the more capable Roku 3.  There is a noticeable performance difference between the stick and the Roku 3. Not in quality of the content but more in the navigation between apps, loading a show or movie, was all much faster. As the months went by we never really missed paying almost $180 a month for 370 channels. When our kids wanted to watch anything they knew how to find it on Netflix, Hulu, or Amazon.

My wife and I watched the Walking Dead on sundays and come Saturdays in fall I was able to watch (cry mostly) Kentucky Football and most other prominent college football games. It was glorious and more importantly we were only spending $125 a month and that includes internet! Through streaming my kids have discovered Heman, Shera, Gem, Transformers, and GI Joe. We have access to thousands of other entertainment choices and we can stream YouTube from our phones via the Roku.

In other words, we love it!

Cord Cutters don’t have much in the way of parental controls.

The honeymoon ended when my son innocently selected a cartoon called Sausage Party. For those uninterested, It’s an R rated cartoon. I can’t blame him, he’s 4, loves cartoons, and loves hot dogs. The image was a hotdog and it looked like a kid show or movie. I began to search on the Roku system settings for parental options. Here is what I found. If you don’t click the link, they only let you require a PIN to add new “channels” or apps. I was a little shocked there wasn’t something more.

So I began to search in the apps they used the most, NetFlix, HULU, and Amazon Video. Nope. Nothing. Amazon allows for a PIN code to purchase content. That was it. There wasn’t anything stopping my kids from choosing content I didn’t find appropriate. With U-Verse I could apply parental controls using the TV rating system. We’re not control freaks but we do censor what our kids watch to make sure it’s age appropriate. Scooby Doo once gave them nightmares. The original cartoon series.

Over all we have been pleased with “cutting the cord”. However if you have children and want to ensure they don’t see shows and movies you don’t find appropriate, you’ll have little control unless you’re always in the room. Curious, I tested to see how long it would take me to find actual porn. I had never checked before (stop laughing I really never have). It took less than a minute on a streaming app we use called TubiTV. So we’re fair to this channel, TubiTV is free movies and TV shows. It’s where my son watches the original Transformers and GI Joe Cartoons. They have a lot of premium content for free, however they have commercials.

If you’re thinking about cutting the cord, we would highly recommend the Roku family of devices. The content available is amazing and there’s a whole world of entertainment you’re not even aware of. If you have children or impressionable teenagers you may need to think about it a little more. Your won’t have many options to limit what they can view.